How Do Fish Drink Water?

One question many people have asked is: Do fish drink water? Just like humans live in air and also breathe it, fish need to consume water to survive. How they get water into their bodies, however, is the interesting part.

Saltwater and freshwater fish take in water differently. They do need salt in their bodies to survive, but they can’t have too much nor too little. As a result, they naturally create a harmonious environment with the water around them through the process of osmosis.

Osmosis is based on the traveling of water across a membrane. For an optimal environment and to ensure the survival of the cells, osmosis must be regulated.

How Do Saltwater Fish Drink Water? 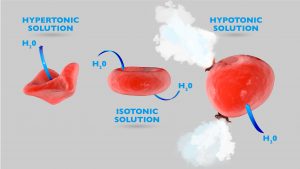 Saltwater fish take in water through their cells. In order to avoid taking in too much salt, however, they eliminate excess salt through their gills. In a normal environment, therefore, the bodies of saltwater fish are less salty than the water around them.

In other words, it’s saltwater in, saltwater out, all the time; saltwater fish constantly lose water out of their bloodstream through osmosis.

How Do Freshwater Fish Drink Water?

Freshwater fish maintain a higher level of salt in their bodies than the freshwater around them. Contrary to saltwater fish, freshwater fish are constantly gaining water into their bloodstream through osmosis. In order to eliminate excess water, they urinate frequently.

Does Water Get Into Fishes’ Mouths?

What does all this mean regarding your fish tank? Most likely, if you regularly lose water from the tank, it’s due to evaporation. The fish aren’t really “drinking” large amounts of the water; instead, they’re circulating the water in and out of their bodies.