Despite its deceptive name, the killifish is one of the most peaceful freshwater fish. In addition to its calm demeanor, the killifish also is less fussy than some other aquarium fish. As if that’s not enough to make it popular among hobbyists, it also adds brilliant color to a fish tank. The main problem with them is that they probably won’t live as long as some other fish. If you’re considering obtaining one for your home aquarium, following are some basic killifish facts that will help you.

12 Killifish Facts You Should Know

1. Although they’re very peaceful, like many other fish, they can be competitive with other fish of the same gender and breed during mating season. 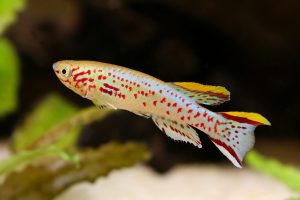 4. The largest is about six inches, while the average size is about 3 inches.

5. You should feed them live fruit flies, brine shrimp, mosquito larva, and worms. They can be fed frozen foods as well.

6. The male killifish has an interesting social life. He usually lives with several female fish. He has to chase them to spawn, but the females find places to hide.

7. Male fish are brighter than female fish – in appearance, that is. It’s not clear which sex is smarter, but we’re betting on the female based on point number 6.

8. They have one of the most peculiar mating habits of any fish. Some lay fish with hard shells inside the mud of swamps and other shallow bodies of water, but only at about two inches underground. Once the pond dries up, the eggs hatch after it rains. The parents, however, will usually have already died, so they won’t meet their babies.

9. Because they prefer cooler temperatures, hobbyists are more likely to have success with them if they are placed in their own tank. The temperature of the tank for killifish should be about 68 degrees, while the ideal temperature ranges from about 74 to 80 degrees for other types of freshwater fish. However, killifish tend to have a short lifespan regardless of how well you take care of them.

11. They can help control algae growth in a fish tank.

12. They live everywhere in the world except Australia, northern Europe, and Australia.

The above are only some of the killifish facts you would need to know if you’re interested in owning one or more. Contact us for more information about how to create and maintain the best environment for them.