The sound of trickling water.

The silence in motion.

The peaceful serenity of another world.

It’s not hard to recognize the calming effects of aquariums. They’re simply surreal, mesmerizing, and idyllic all at once.

As if we needed proof, many researchers have found that aquariums not only have positive effects on mental health, but on physical health as well.

Scientists at the National Marine Aquarium found that research participants’ heart rates and blood pressure improved as they looked at a fish tank exhibit that was being restocked with new fish. People also later reported having better moods after looking at the fish tank exhibit.

There was a difference between tanks that only had artificial seaweed and tanks that had fish added, but both had relaxing effects. Researchers also found that higher biodiversity and more colorful fish in the aquarium enhanced its calming effects. 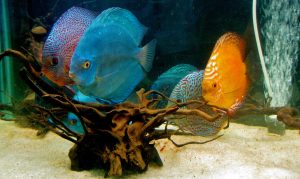 Research shows that the calming effects of aquariums are more significant when the fish are colorful and plentiful, as shown in this discus fish tank.

The sound of the water itself is a key reason why aquariums have positive benefits on mental and physical health. In theory, having an aquarium is like gazing into a river or listening to the ocean waves, and the concept is similar to why people find fishing relaxing.

These findings only reinforce the belief that aquariums can be beneficial in hospitals, medical centers, dentists’ offices, senior centers, and other places where people may feel anxiety.

Installing and maintaining an aquarium can be stressful in the beginning, but you can even eliminate that by allowing us to set it up and maintain it for you in the Phoenix area.

Researchers reported that people were more captivated and had a more positive mood if there were a higher number of fish in the tank, but the calming effects of aquariums exist regardless of the size of the fish tank.

So whether you would prefer a nano tank on your desk or a massive saltwater aquarium in your restaurant, you can reap the mental and physical health benefits.