Brackish Fish for Home Aquariums: What They Are and How They Live

Beyond the saltwater fish and freshwater fish lie species of fish that many aquarium owners might not talk about quite as often: brackish fish. Brackish fish allow for an amazing combination of the best of both worlds, and they open up possibilities for intriguing aquarium designs.

What Brackish Fish Are

Brackish fish live where freshwater meets saltwater, where rivers flow into seas or oceans. Brackish water has more salt than freshwater, but not quite as much as oceans. Certain freshwater fish can adapt to a brackish environment, but some species of fish only live in brackish waters.

Brackish aquariums are a combination of freshwater and saltwater tanks. They’re not extremely common in the aquarium hobby, although some people do enjoy keeping brackish tanks and the hobby is becoming increasing popular.

These tanks also provide the best of both worlds in terms of cost and beauty. They tend to be less expensive to maintain than saltwater aquariums, but hobbyists have options for beautiful and unique fish like they would in a saltwater tank.

There’s one important aspect to note. Because the salinity of brackish water changes with the flow of the water, fish in the wild learn to adapt by moving to more ideal habitats. Because fish can’t relocate in a tank, the challenge of owning a brackish tank is in maintaining an appropriate salinity. In other words, the fish can’t move to where they’re more comfortable like they would in nature, so you have to provide them with a level of comfort that’s acceptable at all times. 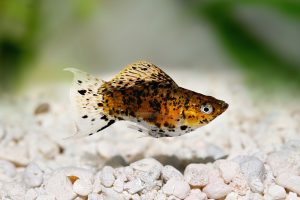 Following are a handful of waters that are considered brackish:

There are some “true” brackish fish, and some freshwater fish that can adapt to the environment.

Two of the most popular brackish fish for home aquariums include Mono Sebae and Mono Argentus. These amazing fish do well in regular saltwater tanks as adults, but they can live in freshwater as juveniles.

Other popular brackish fish include: