The betta fish is bad to the bone, and it knows it. With a personality four times its size and an unforgettable flair, the most popular betta fish are named Japanese fighting fish or Siamese fighting fish for a reason. They can be very aggressive, so much so that they need their own fish tank.

The good news is that they don’t grow to much larger than 2 inches, so they won’t require a whole lot of space. But when someone first said looks can be deceiving, boy, they weren’t lying.

17 Betta Fish Facts You Should Know

1. With their long, full, luxurious, glorious fins waving in the water around them, the Siamese fighting fish look like something between Rapunzel and a peacock.

2. “Fighting” isn’t just their name; it’s in their blood. They were trained to do so for a spectator sport popular in Thailand back in the 1800s. Only a few types of fish are intelligent enough to be trained to do tricks, and the Siamese fighting fish is clearly one of them. By the way, Thailand was once called Siam. … And you thought we were talking about twin fish here! (In fact, the phrase Siamese twins originated there too, but that’s a little trivia for another day.) 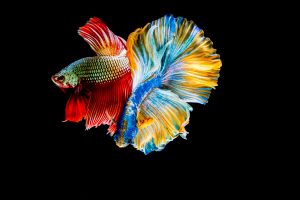 3. Bettas have upturned mouths. They feed mostly on the surface of water.

4. It’s a myth that they can survive in a little fish bowl. They actually need a lot of space to swim freely.

5. Even though you might be able to get away with a small- to medium-sized tank, do change their water every few days. They don’t particularly like dirty water, and you don’t want to make them angry. You won’t like them when they’re angry.

7. The ideal water temperature for them is about 79 degrees.

8. It’s a labyrinth fish, which means it can breathe oxygen from the air as well as through its gills. It can therefore survive outside of the water longer than some other fish. In fact, it may be able to live on land for several hours as long as it stays wet.

9. Males and females are on equal ground in their underwater world. They’ll fight each other regardless of gender. 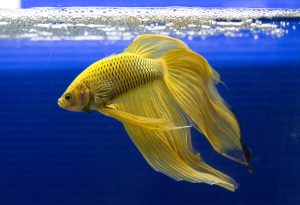 11. They generally live up to three years, but with tender loving care, they might live several years beyond that.

14. Different types of betta fish have different color patterns and tail shapes. Pet bettas can be found in virtually every color under the sun, and individual bettas and their fins can be multicolored. In the wild, their coloring may be paler.

15. Male bettas tend to be larger and more colorful than the females.

17. Female fighting fish are more likely to cohabitate than the male fish, so you don’t always have to keep them alone.

Wanna Bet on a Betta?

We at Seatech Aquariums love betta fish, and we bet you will too. If you’re interested in designing a fish tank for Siamese fighting fish or any other bettas, we’ll be here ready to help.