A discus fish is certainly eye-catching, and its body shape gives it a unique elegance that you would enjoy seeing in your freshwater aquarium. But fair warning: discus fish need a lot of love and attention, so they’re more ideal for experienced hobbyists. If you want to give one a home with you anyway or you are an experienced hobbyist who has never owned one of these beauties before, following are some facts about discus fish you might want to know.

Discus Fish Facts for the New or Experienced Hobbyist

• A discus is a type of cichlid.

• It’s known as the “King of the Aquarium Fish.”

• Its body is flat and round, like a discus used in track and field, and it has large, extended fins.

• Discus fish have beautiful patterns on their bodies that generally include wavy lines or nine horizontal stripes. 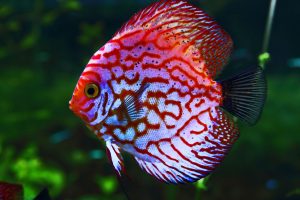 They are available in a variety of vivid colors, although the three main groups of discus are green, blue, and brown. Their colors get brighter when the fish has intense emotions, such as fear.

• They originate in the Amazon basin of South America.

• Their tiny mouths make them appear as if they are striking a pose.

• Discus prefer warm water with a range of 80 to 86 degrees.

• Its title of “king” is betrayed by its size. A discus fish only grows to about 10 inches and generally weighs less than 9 ounces.

• They are carnivores. Ideal foods for them include blood worms, shrimp, and other substantial frozen foods.

• Males and females will stay together as couples. They stay in slightly acidic water during breeding. Both secrete nourishment from their skin for their newborns. The fry feed off these secretions for up to a couple of weeks.

• They’re peaceful fish, so they get along well with each other. 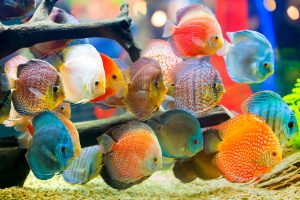 • In the wild, they’re found in schools, so if you do want to own discus fish, you should have several of them in your freshwater aquarium.

• They’re not the fastest swimmers, which is perhaps why they prefer to stay together.

• The scientific name for discus fish is Symphysodon. The red discus is known as Symphysodon discus, and the blue/brown discus are called Symphysodon aequifasciatus.

• Discus fish require very clean water, so having the proper filtration system and regular aquarium maintenance is critical to the long-term health of the fish.

• With proper care, your charismatic and charming discus fish can live up to 10 years.

For additional facts about discus fish tank maintenance, contact Seatech Aquariums online or by phone at (602) 628-7270.