Light is light, right? Isn’t it all the same thing? Well, when it comes to fish tanks, there’s much more to it than that. You should use different lighting for saltwater aquariums and freshwater aquariums for a few reasons.

As an aquarium is set up, the goal is to mimic a natural sea life environment. That’s why a fish aquarium often includes items like dry or live rock when setting up saltwater environments, live plants, coral, and various substrates, depending on if it’s a freshwater aquarium or saltwater aquarium.

While the fish probably don’t need as much light as we think they do, some lighting is critical. The purpose of the light is more for us to see them, but it’s also important for the natural behavioral characteristics of the fish and for the overall health of the aquarium and its inhabitants, especially if they would naturally live in shallow water.

Following are some basic guidelines regarding the best lighting to use for different types of aquariums, as listed by Doctors Foster and Smith. • Freshwater aquariums that contain live plants that depend on light: Standard fluorescent, T-5, HO, VHO, Power Compact, Metal Halide/HQi, or LED at 2 to 5 watts per gallon. When it comes to freshwater aquariums, too much light may result in the growth of algae, but not enough light can endanger the plants. For that reason, it’s important to ensure that the right amount and intensity of light is used.

• Saltwater aquariums / marine reef aquariums that contain fish, invertebrates, corals, and live rock: The recommended lighting system is T-5 HO, VHO, Power Compact, Metal Halide/HQI, or LED. The strength and saturation of light depends greatly on the natural habitat of your specific fish and other wildlife. In the wild, corals can be found deep underwater or in shallower areas, and the same goes for the type of fish that are in your saltwater aquarium. Generally, if your reef aquarium is 24 inches deep or less, use a lighting system of 4 to 8 watts per gallon.

Regardless of how much or what type of light is used, it’s important to regulate the temperature of the tank. Tank water that is overheated can be dangerous to the wildlife. For this reason, you also should limit the use of strong lights or use a lighting system that can be dimmed. It may be wise to have the lighting system on a timer as well.

Have Seatech Aquariums Install Your Aquarium and Its Lighting System

Now that you understand a little more about the different lighting for saltwater aquariums and freshwater aquariums, there are a couple more things you should know.

First, each aquarium is wonderfully unique, and making it so is our goal. The possibilities are endless when it comes to creating a natural habitat for your wildlife. Each piece of coral is as different as each type of fish in the aquarium, and a combination of all the different elements of your aquarium is what makes it all yours. For that reason, the best type of lighting for your tank will depend on a variety of factors, which is why we will include the best system for your livestock as we install your aquarium.

It’s also important to not only use the recommended lights, but also to have them installed properly for your safety and for the safety of your livestock.

Saltwater aquariums are a great way to bring color, beauty and an ‘ocean feeling’ to your home or office.  While saltwater aquariums need more love and care, the vivid and appealing types of fish that can be combined will give you years of pleasure.  Looking for advice but not sure who to talk to? Seatech is your trusted Phoenix Saltwater Aquarium experts.

As with any new hobby or interest, you need to start at the beginning. You need to ask yourself some key questions before you do anything else.

How much room do you have? 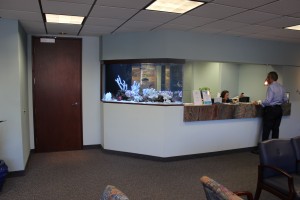 Where do you want the saltwater aquarium located?

The saltwater aquarium tank site is a key factor. This will help you figure out the basic needs for a saltwater aquarium.  You need to have ample power outlets, as well as the right types of outlets, for using pumps, timers, filters, lighting, heaters, calcium reactors, etc. Keeping your aquarium out of direct sun light is also a critical factor.

Take the time to learn how to keep your saltwater aquarium clean and safe. You need to learn how to test your tank for the right pH levels. Testing also can help you stop calcium residue from building up in your tank. Testing also prevents too much algae from growing. You do not want invest all of your time and money and end up with sick or dead fish!

Now comes the best part about your aquarium. You need to decide on what you are going to put inside of your aquarium? This is the most important part! You need to create a balance between fish, fauna, corals, and a marine eco-system that will provide a healthy saltwater aquarium. 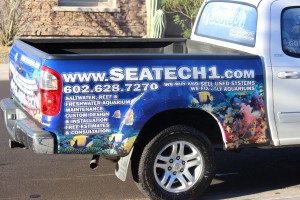 Now that you are ready to begin, let the experts in saltwater aquariums be your guide. As successful Phoenix Saltwater Aquarium experts, Seatech’s 50+ years of combined know-how and training will provide you with all of the essentials needed to create a great saltwater aquarium in your home or office.

No doubt, saltwater aquariums are a lot of work, but the rewards are worth the extra work. And with Seatech as your Phoenix Saltwater Aquariums partners,  you will have all of the expert help and knowledge you need when considering a saltwater aquarium for your home.

Visit their website and ask for a consultation today! Be brave, be bold, but above all, be sure to let the Seatech experts help you take your ideas and transform your home or office into an underworld adventure.  Looking for more great information on saltwater aquariums?  Visit the Fish Channel at http://www.fishchannel.com/saltwater-aquariums/ 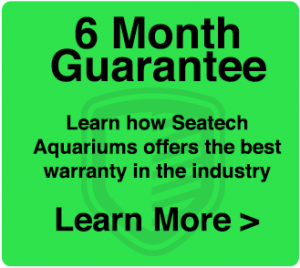